As promised, here is my review of BJ Scott’s Highland Legacy. 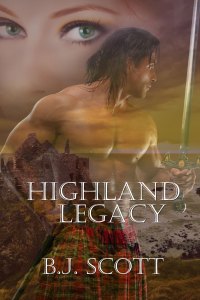 Here is the back cover blurb:

Faced with an abhorrent betrothal, Cailin Macmillan flees her father’s castle and quickly learns that a woman traveling alone in Medieval Scotland is an easy target for ruthless English soldiers. When Highland patriot Connor Fraser comes to her aid, his steadfast dedication to king and country is challenged by his overwhelming desire to protect Cailin—even if he must marry her to do so.

Accused of murdering one of her attackers and determined to rely on her own resourcefulness, Cailin dresses as a lad, intent on seeking refuge at the camp of Robert the Bruce. Can she elude an enemy from her past—a vindictive English lord bent on her utter demise—or will she fall prey to his carnal intent and be executed for a crime she did not commit?

This book reminded me of some of the very first romance novels I ever read: Julie Garwood (I think I read all of them, I really do. I devoured them in high school). In terms of style, content and setting, it’s a lot like JG’s Highlander books. I remember plowing through those books in a few hours and then going back through them later and re-reading the really interesting parts. (Hey, I was sixteen and nerdy. What do you expect?)

That’s probably why, when you look at my bookshelf, there are certain books that automatically fall open to those same interesting places.

This is a solid story, one that captured my attention early on and held it. Set in the time of William Wallace, Sir Simon Fraser, and Robert the Bruce (who all make appearances), this is a story of larger than life heroes and the women who love them. Connor Fraser is a man committed to his cause who doesn’t want the responsibility of having a woman and children of his own; Cailin Macmillian is a fiery woman who craves the love and affection she never got from her domineering, disappointed father.

This was a fun book to read for a girl who cut her teeth on those Scottish historicals way back when. I always did love me a man in a kilt. After all, the first guy I ever crushed really hard on in high school wore a kilt. Later, I realized it probably had more to do with Julie Garwood’s men in kilts than it did with him. Ah, well, to be young and so easily influenced again! 🙂