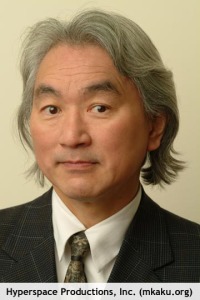 I have, perhaps, the most insane crush. (No, not the one I have on Nathan Fillion. Everyone gets that one). No, this crush is on a physicist.

The object of my fangirlishness (pretty certain that’s not a word, but it’s my blog) is Michio Kaku, a physicist who is on the Science Channel all the time.

See, I like smart men. In my younger years, I refused to date a man who wasn’t smarter than me in at least one thing (except the one, but we’re not talking about him, mmkay?). Since I’m no slouch in the subjects I’m good at, that pretty much meant any man I dated had to be good at math, because I am not, unless it’s stats.

So yeah, I dated math geeks. I married one, too.

In any case, I’ve got a thing for Michio Kaku because, well, I think he’s smart (I’m sure he’d scoff at that and say, “Smart? Of course I’m smart! I’m a freaking physicist, yo.”). I get flustered when he starts talking about gravity. He starts talking in numbers and I feel… I feel… twitterpated.

I think I understand what it feels like to be a bimbo.

My mind goes blank. I stare in awe. I know every word coming out of his mouth must be in English, because, well, we’re watching American TV. Still, I can honestly say, half the time I don’t have a clue what he’s saying. My mind sees the numbers he’s talking about, and it stutters. My one, lonely synapse fires randomly, all bewildered and confused.

And I love it.

So yeah, I watch the shows he’s in, and every time Kaku comes on, I tell the husband, “I love this guy. I understand a good half of what he’s saying.” it’s fascinating, and I feel dumb, because I know he’s explaining physics in lay terms, and I still don’t get it. It’s like this little hero worship thing–he’s so excited about a subject I just don’t understand. I wonder if anyone looks at me while I’m all lit up about the latest treatments for apraxia or cluttering, and thinks I’m cute.

Somehow, I doubt it.