So, I talked Hubs into taking Edinor with him out to the gun range the last time he had training.

I was supposed to go, too, but alas, I had the children that day, so it was a no-go. Darn. Husband keeps thinking if I spend more time out there, I won’t flinch like a giant baby when I look at his duty weapon. Ha! Little does he know, the pansy is fierce in this one. (Actually, we’ve been together for sixteen years in a month or so, so I think he’s seen the light. He is the mighty protector. I, uh, am not.)

In any case, I find it amusing that Husband has no qualms about taking a stuffed Tyrannosaur out to the gun range and snapping pictures, but he refused to have her wear bling. Tiny daughter and Husband are ganging up on me, I think. What’s with this lack of bling? And why shouldn’t a stuffed Tyrannosaur be bedecked in jewels? I’d want to be fully blinged if I were a stuffed Tyrannosaur that paraded around in a dress. After all, they have big heads and small arms. They have to compensate for that somehow, right?

Um, yeah.I don’t know where that came from, either. 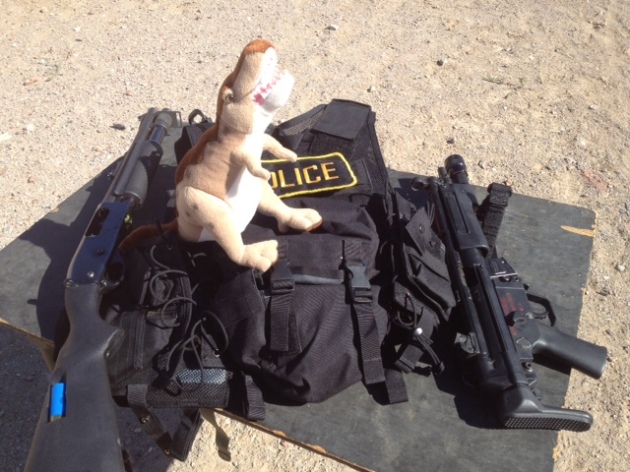 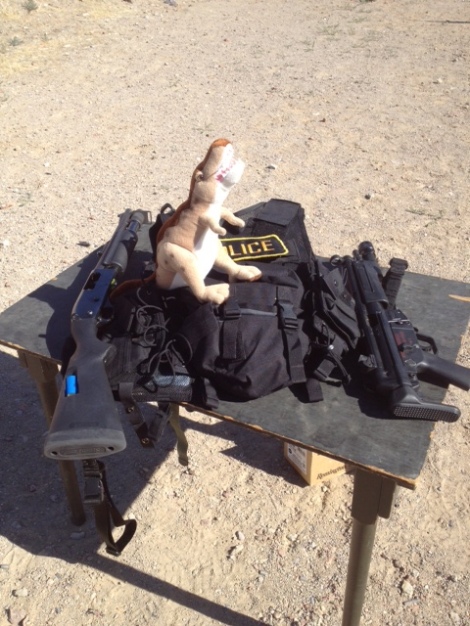 (And no, Hubs is not as shameless as I am. I would’ve asked the boys to pose with the dinosaur.)